But how did we get this mixed up icon of salaciously safe female sexuality? A figure that’s somehow simultaneously suitable for the side of weapons, twee tattoos and more boudoir shoots than you can shake a stick at.

Well my friends, let’s start at the very beginning (a very good place to start) with the mother of all pin ups:

Created in 1887 by Charles Gibson, The Gibson Girl is now widely accepted as the first pin up.

Drawn lasciviously The Gibson Girl represented a woman that could be imitated but couldn’t actually exist (thanks to biologically impossible!)

She had sizeable breasts but an itty bitty wasp waist. A swan like neck and masses of dark hair piled precariously atop her head, that was miraculously impervious  to sweat, rain and general disaster.

But what bought the Gibson Girl to life was that she had a clear personality.

The Gibson Girl was based on ‘the new woman’. Self assured, put together, sensual and intelligent all at once. She wanted independence, but like… not too much independence (Gibson Girls weren’t after the vote, that would just be crazy!)

A Gibson Man was created to go with The Gibson Girl, but much like Ken to Barbie, nobody really cared.

It was the impossible woman they wanted to pin to their walls, not her random boyfriend.

Soon there was a Gibson Girl boom, with her face appearing all over magazine and newspapers; quickly becoming the ideal standard for Western beauty.

Women donned Gibson Girl-Esque hair do’s, along with s-bend corsets which simultaneously pushed out the tits, nipped in the waist and pulled the wearers back forward, allowing for that classic Gibson Girl arse to tit ratio.

But the outbreak of World War 1 saw the demise of the Gibson Girl.

No more would women obligingly get that Gibson Girl figure by donning an s-bend corset.

You see, women had things to do, countries to keep running and they kind of needed working spines for that shit.

So they stepped up, wearing more practical and masculine clothing than before.

A trend that was immediately sexualised for war propaganda 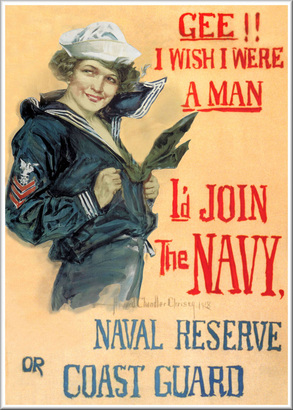 George Petty had been airbrushing and illustrating for years, mainly for cheese-tactic sexed up adverts and calendars. But in 1933 he joined fledgling magazine, Esquire and became an immediate hit.

Placed slap bang on a double page in the middle of the magazine, Petty’s drawings coined the term centrefold, as they were torn out and given prime real estate on walls and lockers around America.

A ‘Petty Girl’ was the classic all American girl next door, just reeeeally sexed up! She was lithe, but curvy, with elongated limbs that made her legs go on for daaaays (again with the almost entirely biologically impossible women!)

But what really made the Petty Girl a phenomenon was that Esquire readers could place her into their worlds.

She was posed in idealised every day scenarios from chatting on the phone to celebrating  seasonal holidays and even ingratiating herself into what were then typically male jobs.

Soon Petty Girls weren’t just on bedroom walls, they’d been adopted by soldiers looking for a slice of comforting similarity as they headed to war.

It was easy to transpose a childhood sweetheart or crush onto a perfect Petty Girl; after all that was the whole point of their design!

And just like that pin ups went from books to bombers.

Petty style drawings were used to sell magazines to men, but they were also marketed to women. Selling everything from fashion, homeware and films; MGM even made a film about the drawings (the imaginativley titled, Petty Girl)

With such success came a ton of rival artists, all with a slightly different take on what made the perfect imaginary woman:

Gil stepped up George Pettys knack for the everyday. Placing models in even more average scenarios (cooking, decorating, hanging out with cute animals)

Yet he made these hum drum scenes both implausible and accessible, by setting up his pin up girls as cutesy girl children who were also sex objects (basically the proto type for any modern rom com lead!)

Sure she might be flashing her underwear…but only because the poor lamb had accidentally tripped!

As well as this ‘cheesecake’ pin up style, Gil was known for his masterful (and slightly maniacal) manipulation of the female form.

He’d have models pose for pin up photos, then set his pencil to work, nipping, tucking and enlarging certain key assets until he had the perfect fantasy

And just as before, it wasn’t just men buying the pin up fantasy! Women were a key audience and they would be vital in its evolution:

Zoe made her mark by creating pin up illustrations that veered much closer to reality than her male peers work.

Sure these painted ladies were still very much in the realm of make believe, but Zoe worked to have them look like actual women; tiny waists are great and all, but not when they are so teeny that women need to find somewhere new to keep stuff like their organs… 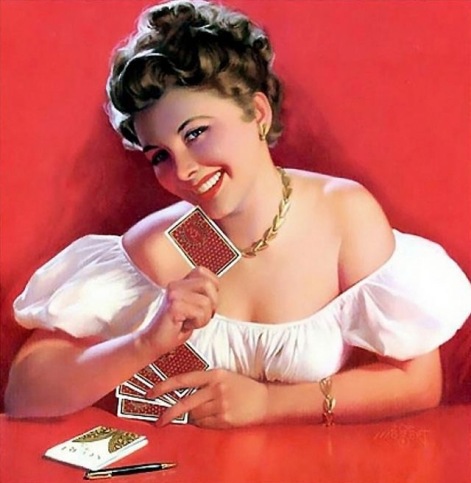 It seemed like Zoe was onto something; her realistic approach was selling like hot cakes, from adverts to film posters and men’s calendars.

But there was a problem – now the public wanted real women!

By the late 50s, photography was the order of the day. With the likes of Marilyn Monroe and Jane Russell were decorating walls and pin up started to die out.

Pretty soon it was the 60s and imagined illustrations just couldn’t compete with the likes of Playboy, whose mix of explicit images and -ahem- articles, had taken America into a new age of sexual fantasy.

And yet the pin up could not be destroyed.

The classic Petty, Mozart and Evgreen style of pin up is very much back in. Just now it’s labelled as a vintage and classy alternative to the today’s more intense male gaze.

You can see it’s traces in everything from Virgin airlines branding to cutesy advertising and of course, every time a bridesmaid has worn victory rolls and a halter neck to a ‘vintage wedding’.

This was interesting where can I find out more? For Gibson Girl goodness I’d suggest checking out, The Weaker Sex: The Story of a susceptible bachelor, which is a reprint of some of Charles Gibsons best work.

2 thoughts on “The History of Pin Ups”