In 1865 Dr James Barry was stripped of his identity. A violation that’s still being exploited today. So who was Dr Barry and what does his story tell us about LGBTQ history? 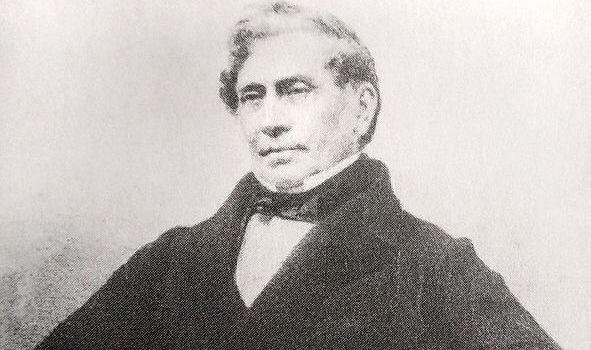 Doctor James Barry was a well respected and hugely influential Army doctor. His work improved medical conditions for soldiers receiving medical care during warfare and his practices around cleanliness and sanitation made their way into hospitals back home too.

But that’s not why we’re talking about Dr Barry today.

Despite all his achievements, Dr Barry is mainly remembered because of rampant speculation about his gender.

After his death – despite his will and direct wishes – it was ‘exposed’ that James Barry had been assigned female at birth.

As a result of this, the good doctor has been claimed by some as a figure in women’s history. Several books about Barry include the word ‘woman’ in the title, with a new with a novel due out soon that presents Barry as a woman.

Still others argue that his identity is too complex to define… but is this the truth of it?

But before we delve into the modern politics, let’s discover who this incredible man actually was.

Born in Cork, Ireland around 1795, James was an intelligent child who grew up with the aspiration to become a doctor and work for the army. In 1808 he put that plan in motion and set off to Edinburgh University to start his medical degree, receiving his medical doctorate in 1812, after which he moved to London and trained at the prestigious Guy’s and St Thomas’ hospitals. Shortly after this he passed his qualification under the Royal College of Surgeons.

As soon as he had this under his belt James up and joined the army, kicking off an illustrious and well respected career. Barry spent ten years in Cape Town, South Africa where he improved sanitation and water systems, which reduced deaths from infections.

He also set up a leper sanctuary while he was there and improved conditions for slaves, prisoners, the lower ranked soldiers and the mentally ill. This commitment to those in lower and more vulnerable classes was unheard of at the time and it meant he ruffled a few feathers. The fact he was also a bit of a belligerent ass also meant he was disliked by many of his peers.

He then had postings in Mauritius, Jamaica, the West Indies, Malta, Corfu and even found time to help with the Crimean War effort on his own time. Dr Barry was then posted to Canada, in all his posts he continued to fight for improved sanitation practices. His blunt and stern demenour got him repremanded by superiors many times, but the quality and skill of his work made him almost untouchable!

He had a famous run in with Florence Nightingale while they were both stationed as medical staff during the Crimean War. Nightingale described James as ‘the most hardened creature I ever met.’

In 1859 James was forcibly retired from the army due to his failing health and age. He passed away a few years later in London on July 25th 1865.

Dr Barry requested in his will that no autopsy be performed, his body not inspected in any way and it was to buried as he was found. Unfortunately he did not get his wish and the maid who prepared his body for burial exposed Barry’s previous identity.

She took this information to James’ physician, Dr R. McKinnon, who had signed him as male on the death certificate. Dr McKinnon refused to pay the maid when she tried to blackmail him and she retaliated by taking this story to the press.

Since this then there has been the rhetoric that Dr James Barry was just a woman disguising himself as a man to get by.

This kind of erasure of LGBTQ history and identity is something that’s prevalent among historians, history fans and in historical media today.

King James I was just good mates with George Villiers, despite love letters calling George his ‘wife’ and a passageway between their rooms being discovered. People still argue Anne Lister wasn’t a lesbian, despite the fact she wrote in her diaries that she loved ‘only the fairer sex’.

Transgender identities in history receive the most debate and outright aggressive erasure of the LGBTQ community.

The excuse used for this type of erasure is that none of these identities existed ‘in those days’. But here’s the thing- Not having the language to express an identity in a way that makes it palatable today doesn’t mean Trans people didn’t exist.

Are there are examples in history of women disguising themselves as men to get ahead in another profession? Yes. But these women still identified themselves as women (see Margaret King).

James was not a woman.

In all Dr Barry’s written discourse he referred to himself as male, he did not want his body examined after death. Dr James Barry was a Transgender man.

There’s arguments for and against this statement, including the fact that Dr Barry was offered the chance to practice medicine in Venezuela, where women could practice as Doctors, but he turned it down.

Or the fact he maintained his identity as a man even when accusations of sodomy (illegal at the time) were counted against him.

The argument that Barry must have identified as a woman includes the fact that pictures of dresses were found in one of his trunks.

But all these arguments pale when we look at this one simple fact – Dr James Barry lived and died as a man. His correspondence was as a man and he wanted his identity protected after his death. Anything else is just projection.

Dr Barry is sensationalised in a heinous way that exploits and reduces trans identities down to sexual organs and ‘shock’ reveals.

Again I reiterate that he asked for his wishes to be respected after death, and he was violated in an unforgivable way.

And this violation continues today.

Dr James Barry had his identity stripped from him and we need to give it back. After years of arguments and misgendering we at least owe him that.

That was interesting, how can I find out more? Well I highly recommend the following articles by Jack Doyle and E E Ottoman for further reading.