As hundreds of thousands of young people across the world take to the streets making it clear that Black Lives Matter, the story of The Birmingham Children’s Crusade has never been more relevant.

Birmingham, Alabama was as Martin Luther King Jr put it, ‘the most segregated city in America.’ In 1926 the city had put in place regulated racial zoning laws, despite the Supreme Court declaring such laws unconstitutional almost a decade earlier in 1917! Birmingham was a bubble. Seemingly immune to the changes going on outside its borders. Yes, there were other cities and towns desperately clinging onto these draconian laws, but none quite like Birmingham.

If Trump was an American city, he’d be Birmingham in the early 1960’s. It didn’t matter what the countries laws were, what the supreme court said or what was unconstitutional. Birmingham was not going to change with the tide. By now the cities population was 60% white and 40% black. Yet there were no black people in high up jobs within the city, in fact the only jobs they could get were in those designated ‘black areas’ or as manual labourers. There was a clear line between the haves and the have nots and dear god there would be hell to pay if anyone tried to change that.

In the early 1940’s several black families had bought homes on the west side of Centre Street, a leafy hill in the middle of the city, which until then, had been a white area. It was a defiant move and not one without consequences. The area become known as ‘Dynamite Hill’. The KKK shot out windows, doors were burned down and at least 40 unsolved bombings (most targeted at dynamite hills residents) took place between the late 40’s and 60’s.

Imagine being a black kid growing up amidst all of that. Not only faced with the threat of violence and death, but also with the insipid day to day prejudice. You could only attend the cities fair on the night reserved for ‘Niggers and dogs.’ The unofficial confederate anthem, Dixie, played from the (ironically named) Protective Life Building every day. There was not one moment where you weren’t reminded how inherently inferior you were; the city bought the white kids new school text books, but you, well you weren’t worth that.

“We knew that as Birmingham went, so would go the South.” – Wyatt Tee Walker

In early 1963 Martin Luther King Jr and the Southern Christian Leadership Conference came to Birmingham to help protestors. They launched a campaign of non-violent direct action, staging sit in’s, peaceful marches and boycotts. Knowing that even though the protestors were not using violence, the cities cops would; and in doing so they’d be inadvertently putting the cities rampant racism under a magnifying glass.

As the nation’s eyes started to turn towards Birmingham, the cities government became scared and tried to quash the campaign. In April 1963 they banned the protests and raised bail for protestors arrested to several thousand pounds (in todays money). As the campaigners rallied, the city doubled down. Even arresting Martin Luther King Jr. It was becoming harder and harder to get adults to protest, after all many were far from financially well off, could no longer afford bail and if arrested, it could mean their families had to choose between food or rent.

But there were still protestors to keep the fight alive. Birmingham’s young people. They wanted to step up to the plate, not only because if they were arrested it wouldn’t have the same financial impact on their families, but because they wanted change. They were sick of being expected to just take prejudice and the threat of violence as a fact of life. They wanted to claim their rights and reclaim their futures.

And so, The Birmingham Children’s Crusade was born. 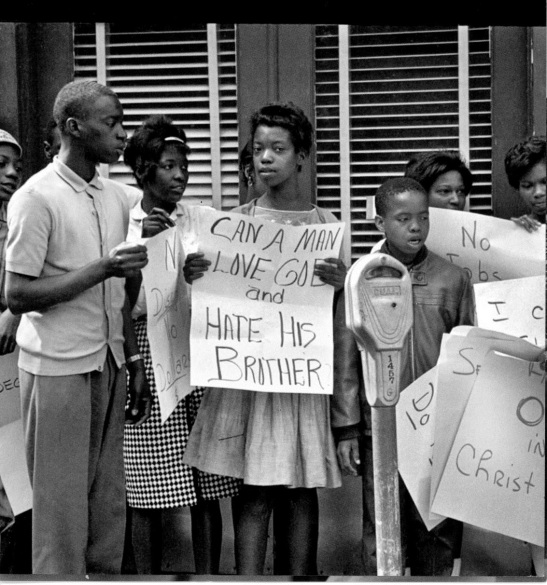 We didn’t hate white people…We hated the system. That’s what we were protesting about.” – Janice Wesley Kelsey

Flyers were sent out and top students and high school athletes were bought on board to help recruit other kids. The cities Sixteenth Street Baptist Church became HQ for the campaign. Teenagers and children alike were taught how to be silent when arrested, to not run if faced with a snarling police dog and to stay down if a cop knocked them to the floor. They were asked to bring a toothbrush with them to the protests, as they wouldn’t be given one in jail.

They knew the risks going into this. The goal was to fill up the cities jails and to protest peacefully. They’d likely be beaten, have hoses turned on them and abuse screamed at them by white supremacists. The kids knew that they couldn’t fight back, they even had to pledge to remain nonviolent. Whatever happened to them, they couldn’t raise a hand. But they signed up anyway, with nine-year-old Audrey Faye Jenkins telling her mum ‘I want to go to jail.’

On the morning of May 2nd 1963, Audrey, along with three to four thousand children marched on the streets of Birmingham. Some went straight from Sixteenth Street Baptist Church, others met with their classmates at school before hitting the streets. Singing and praying as they went.

Almost immediately the arrests began. In the first day over 1000 kids were arrested. School buses were commandeered to take them to jail. Audrey was the youngest known person arrested and she spent seven days in jail; at just nine, she wasn’t even allowed to call her parents. Audrey, along with all those arrested were packed into cells, even when the jail was hundreds over it’s capacity limit.

But it didn’t stop at the arrests. As predicted police used hoses to quell the protests. The powerful jets slapping the kids to the pavement and against walls. One of those who was pinned to buildings by the cop’s hose was fourteen-year-old, Carolyn McKinstry, who said:

“It felt like the side of my face was being slapped really hard. It hurt so bad I tried to hold on to a building so it wouldn’t push me down the sidewalk, and it just flattened me against the building. It seemed like it was on me forever. When they finally turned it off I scooted around the side of the building and felt for my sweater. They had blasted a hole right through it. And then for some reason I reached up and touched my hair. It was gone, on the right side of my head. My hair, gone. I was furious and insulted.’

The pictures of this brutality became front page news across America.

Despite calls from everyone including US President John F Kennedy for the children to return to safety and stop protesting, the kids took to the streets again the next day. Even people like Carolyn, who were still injured from the day before, took up their placards.

By May 3rd Birmingham’s jails couldn’t fit any more kids. The cities Commissioner of Public Safety (again, ironic job title there), Theophilus Eugene “Bull” Connor, ordered the hoses that were fired at the protestors be ramped up to a level that could rip bark from a tree. In addition, he allowed the use of attack dogs on the child demonstrators.

And still, the Children’s Crusade would not stop.

Soon the city was on its knees. The entire country was watching and appalled. Birmingham firefighters refused orders to use their hoses on the kids anymore. Bull Connor was losing his grip and becoming ever more ferocious in his tactics against the protestors. The cities fairground was turned into a makeshift jail and Connor urged Birmingham’s white citizens who were watching the protests to come and see the ‘dogs at work’ when they were let loose on the kids. When one leader in the cities civil rights movement was injured after a hose was used against him, Connor mourned that the attack hadn’t left the man ‘carried away in a hearse.’

Meanwhile at the fairground/new jail, things were beyond bleak. One jailed protestor, then 16-year-old, Gloria Washington Lewis, recalled that she shared a cell with a girl whose arresting officer had raped her. The girl’s attacker came back to rape her again that night, getting into the cell. After Gloria and her fellow inmates fought him off, they were sent to County Jail. Nobody told her parents she’d been moved. With Gloria saying:

‘Every time somebody would get out, I’d say, ‘Call my daddy… the jail kept saying I wasn’t there.’

On May 10th local leaders from both sides made an agreement to end the protests. It was agreed that all the arrested children would be freed and that local businesses in Birmingham would de-segregate.

Despite this, things were slow to change in Birmingham. Although many businesses did comply with the new de-segregation laws, there was still an undercurrent of white supremacy, which tragically culminated in the bombing of Sixteenth Street Baptist Church, the former HQ of the Childrens Crusade, in September 1963.

The KKK had laid dynamite by the church basement and set it off. Killing four girls as they changed into their choir robes – fourteen-year olds, Addie Mae Collins, Cynthia Wesley and Carole Robertson, and eleven-year-old Carol Denise McNair.

Although the immediate aftermath of The Children’s Crusade was marred, that doesn’t mean it wasn’t a turning point for the city and all of America. JFK had watched the Birmingham Children’s Crusade in shock. The treatment of the kids and their bravery made it clear that change across the whole country, not just Birmingham, was essential. Leading to the 1964 Civil Rights Act.

It showed and continues to show, the difference that young people can make when it comes to politics and change. With The Birmingham Children’s Crusade leading the way for millions of other young changemakers. The young people that are out there right now, continueing this long fight for the government, law and society at large to realise that black lives, like every life, matters.